America’s myriad socio-/econo-/political oddities have certainly made for some high-quality dumpster-fire viewing. In the NFL, the result has been fan-less arenas, emergency cancellations of games (this week, Detroit Lions at Minnesota Vikings is an endangered species, and Matthew Stafford is out regardless, as he’s sidelined as Covid positive) and the once-every-24-year schedule that has essentially nearly every Eastern and Pacific Time Zone-based team crisscrossing the country for away games several times this season.

But here’s what’s interesting: On the macro level, the 2020 effect has leavened the playing field for NFL bettors even while stuff like the Dallas Cowboys starting out 0-8 ATS happens. To cite some of the more interesting statistics…

The point here – at least NFLbets hopes so – is that the considerations vis-à-vis extraneous factors aren’t nearly as relevant as in season past. That said, NFLbets has eyes on…

Once again, the Seahawks are the favorite – in every game since week 1 at Atlanta (???) they’ve been so and with good reason. Seattle’s now 6-1 SU/5-2 ATS and boast the league’s highest-scoring offense and the top defense in generating turnovers. Russell Wilson-to-D.K. Metcalf has emerged as the top battery in the league, and the offensive line is top 10 in run blocking per Football Outsiders’ DVOA metric.

The 6-2 Bills have similarly been favored in all but one game in 2020 thus far but are a weak 3-5 ATS; only twice winning by more than 7 points – by 10 and 8, respectively, in two games against the crazily bad New York Jets. Buffalo brings an average offense and bottom-10 running defense. Statistically, the Bills look good against the pass, but they’ve not yet seen an offense like Seattle’s. Buffalo has allowed just over 350 yards per game, whereas Seattle has run up less than 350 total yards just once.

The way NFLbets sees it, the line in this game is only as low as 3½ because of the East-West travel, but the Seahawks have had four weeks since their game at Miami and the Carroll-and-Wilson ’Hawks are 24-9 SU/22-9-2 ATS on the East Coast since 2012. And again, the Seahawks are just the better team. So NFLbets says take the Seatlle Seahawks -3½ at Buffalo.

We’re also saying take the under on an O/U of 55½, and we’re playing this one solely by the numbers: The over in Seahawks games is 5-2; in Bills games, it’s 5-2-1. With Seattle’s defense getting evermore bend-don’t-break (Arizona game notwithstanding) and Buffalo’s offense colling off (fewer than 19 ppg over the last four games…? Ouch), if this game’s score goes over, it’ll be in a Seahawks blowout. Slightly reverse logic it might be, but NFLbets also advises to take the Seahawks by 14 or more at +340.

Seahawks OTAs have different feel with no Wilson, Wagner

Seahawks are no longer the team led by Russell Wilson and Bobby Wagner. Wilson is in Denver and Wagner is with the Rams. The team has no players remaining from its Super Bowl championship team in 2013. Jordyn Brooks will take over the defensive play call duties that Wagner had. Geno Smith seems to have the lead in the competition with Drew Lock to be Wilson's successor.   . . . ... It's fun to watch it take shape and see the guys step into the roles. They will probably come at some point during the summer. it's a new season, it’s anew team and here we go. Denver Broncos host Seattle Seahawks on Monday Night Football in 2022. Russell Wilson spent his first 10 years in Seattle and was traded to the Broncos this offseason. He is a nine-time Pro Bowler and won two Super Bowls with the Seahawks. He will play for the Denver Broncos in the 2022 season. The game will be played at Lumen Field. It will also be broadcast on NFL Network. Wilson wants the game to be non-emotional. There was speculation that he might want to leave Seattle. ESPN's Adam Schefter reported in February 2021 that Wilson would accept a trade.

Marquise Goodwin signed with Seattle Seahawks on Monday. Goodwin played for the Chicago Bears last season. He played four seasons in the NFL, including three with the San Francisco 49ers and one with Buffalo. Seattle drafted Bo Melton and Dareke Young in seventh round.   The Seahawks' wide receiver depth chart is Tyler Lockett, DK Metcalf, Freddie Swain and Dee Eskridge. 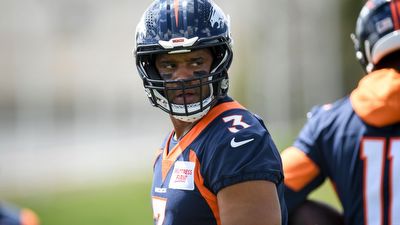 Russell Wilson played for Seattle for 10 seasons. He will play the first game of the 2022 season against the Denver Broncos on Sept. 12. Wilson has a lot of respect for the team he played with in Seattle. He tries to keep his emotions to a minimum during the game. The biggest thing for him is to focus on the fundamentals and play football as he always has. It's important to play for your team. and try to win. for Wilson. Denver had their first OTA practice of spring on Monday.

Baker Mayfield is unhappy with his contract with the Cleveland Browns. Seattle Seahawks have been mentioned as a possible suitor. May was seen at a Seattle brewery on Sunday. 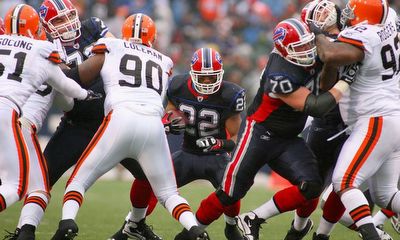 Buffalo Bills went without a playoff win for 17 years. Eric Wood, Eric Moulds and LeSean McCoy are the players who deserve to be on the list.   The list is composed of the best players that never/rarely made the playoffs while they played in Buffalo. The team won the championship in 2017. It was the first time since 2000 that the team had won a championship since 1999.

The 2018 NFL offseason is behind us. Buffalo Bills made some big moves during it. Pro Football Focus gives them a grade of B-plus. 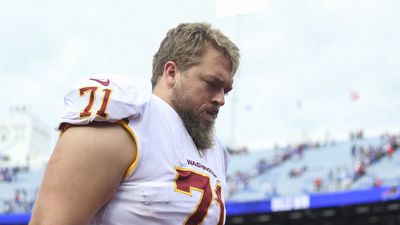 Vote for the GIF that best tells the story of the game between Washington Football Team and Buffalo Bills.

Seahawks: 7 veteran players who might lose their roster spot in 2022

The Seattle Seahawks begin the next phase of their offseason program today with the first of several OTA practices. 90 players will be competing for a roster spot for the 2022 campaign. 37 players are inevitably going to get cut. Carson is one of them. He's missed 40% of games and is entering the final year of his contract.