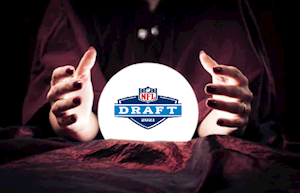 With nine proposition bets offered – no one’s taking odds on a kicker or punter going on Draft Day day one, apparently – on a good six one can figure on the (heavy) favorite in the over/under winning:

The first factor to consider in betting positional NFL Draft props is the difference between the top-tier of the draft class and the second level guys. Even the most nominally interested NFL bettor can easily name the top five QBs, all of which could conceivably be off the board by pick #9: Trevor Lawrence (LSU), Zach Smith (BYU), Justin Fields (OSU), Trey Lance (NDSU) and Mac Jones (Alabama). After that quintet, it’s … Davis Millis (Stanford), maybe? Not that Mills in any slouch, but the demand for quarterback will plummet after the Patriots chose at #16. Take the under.

NFLbets is uncertain as to why this line was set at 0.5, when at least three likely future pros are just waiting to be overdrafted: Travis Etienne (Clemson), Najee Harris (Alabama) and Javonte Williams (UNC). Will at least one team get starry-eyed about a skill player (like the Jets at no. 23) or take a flyer on another backfield weapon (Steelers at no. 24)? Absolutely. Take the over.

There are good reasons for the crazy-short line on the under here. Since 1990, just 32 TEs have been drafted in the first round. In six of those past 30 drafts, 2-3 tight ends were first-rounders the same year; this translates into zero or one TE chose in 80% of first rounds in the past three dacades. Kyle Pitts (Florida) is a shoo-in. No one else is. Take the under.

Similarly to TEs, LBs in 2021 show one first-round certainty – Micah Parsons (Penn State) – followed by question marks and solid-if-not-hyperbole-inducing prospects. Jamin Brown (Kentucky) has received praise for his athleticism and smarts, but has started just 11 games thus far into his high-level football career. Jeremiah Owusu-Koramoah (Notre Dame) and Nick Bolton (Houston) are on the bubble, but the mid-range drafters would mostly have to bypass a talented squad of offensive lineman for all four aforementioned LBs plus a fifth (Jabril Cox of LSU, maybe?) to crack round 1. Take the under – in fact, if you can get “under-3½” in this prop bet, you’ll want to grab a piece of that action as well…

Neither of these lines is particularly enticing but, in a gun-to-the-head situation, NFLbets takes the favored under there. Patrick Surtain (Alabama) and Greg Newsome (Northwestern) appear to be first-round locks, but with 12 or 13 (depending on the Denver Broncos) of the top 14 picks likely to be offensive, four CBs taken between picks 16 and 31 – assuming the Patriots go QB or LB while the Buccaneers are good with their re-signed CBs – seems like a stretch. Take the under.

This one may be read as “Will Trevon Moehrig (TCU) be chosen in round 1?” Late in the first round are the New Orleans Saints (at no. 28), Green Bay Packers (no. 29) and the Tampa Bay Buccaneers (no. 32), all of whom could well be in a position to simply draft the best player available. Even prior to these three are the perpetually defense-minded Baltimore Ravens at no. 27. Clearly the bookmakers are having difficulty imagining at least this foursome passing on Moehrig as well. Take the over.

So far, so good – sort of. The biggest payout among NFLbets’ six chalk picks is -120 and no one’s getting rich playing odds shorter than even. With a little logic, however, the remaining four offerings – and what sportsbooks may be overlooking become apparent strictly mathematically. Assuming the previous five bets all hit by 0.5 cumulatively, this leaves 16 spots in round 1. NFLbets therefore deduces the following for the remaining four offerings in the positional prop bet.

As stated above, the first half of round 1 looks seriously heavy on the offense with quarterbacks alone conceivably going at nos. 1, 2, 3, 4 and 8 or 9. But as offensive-imbalanced as prospective nos. 1-14 look, day one’s remainder will be dominated by defense. NFLbets identifies five teams who could use an immediate starter at DL and whose front offices are sane enough to address the need: the Miami Dolphins (no. 18), Indianapolis Colts (no. 21), Tennessee Titans (no. 22), New York Jets (no. 23) and Pittsburgh Steelers (no. 24). If offense-obsessed Jon Gruden can draft to his Las Vegas Raiders’ needs at no. 17 with, likesay, Zaven Collins (Tulsa), this one’s a lock: Take the over.

Always the default choice for mid- to late-round teams whose above-average quarterback requires more line protection than currently on roster. Fitting the bill are the “Los Angeles” Chargers (no. 13), the Minnesota Vikings (no. 14 and on the hook for $40 million-plus to Kirk Cousins over the next two years), Arizona Cardinals (no. 17), Chicago Bears (no. 20), Jacksonville Jaguars (no. 25) and Kansas City Chiefs (no. 31). Beyond this, the Cincinnati Bengals are set to be gifted the monstrous. Penei Sewell (Oregon) at no. 5. Together with some late-1st team looking to add the top talent remaining, NFLbets figures that’s minimum eight chances to hit seven spots. Take the over.

This is where logic and rationality may not necessarily prevail in the face of splashy hype and stats. The top tier of WRs in Draft Class 2021 numbers four and these outpace the rest: Ja'Marr Chase (LSU), Roshod Bateman (Minnesota), Jaylen Waddle (Alabama) and Heisman Trophy winner DeVonta Smith (Alabama). Already all other than Chase feel overhyped and all are looking to be drafted within the top 15 to 16. Just one WTF could make this bet – and a few others on this proposition – go ka-blooey, but we’re riskily saying take the under.

And bingo! 32 picks, 32 players. Now NFLbets just has to figure a way to hedge against Gruden getting wacky…