Please bet responsibly, i.e. Do *not* wager on the undefeated Buffalo Bills

You know the pint-sized warning that sports betting providers are required by US law to include as bumper to audio and tv commercials? You know, like “please bet responsibly” or “always gamble responsibly”? Well, although likely not the intent of the warning, NFLbets would suggest that one of the best ways to bet responsibly is simply to *avoid betting most proposition bets.*

Now, don’t get NFLbets wrong: You’re perfectly free to do your NFL betting in whatever form you wish; hell, from time to time, NFLbets may even find a particularly appealing player or team prop to throw a few Moneys at. All we ask – no, implore – of NFL bettors is simply to realize that the more bets NFL bettors make on props, the more their wagers look more like gambling than sports betting. And once hapless punters start thinking about multi-player props, well, they might as well be picking ODD or EVEN at the roulette wheel.

Case study #1: A CBS Sports piece of last week utilitarianly entitled “One NFL team has drawn more bets to go undefeated than the other 31 teams combined.” Even beyond its clickbait nature (spoiler: the “One NFL team” is the Buffalo Bills), this headline is further purposefully deceptive in that the entire pool of bettors playing the “Team X Goes Undefeated in the Regular Season” proposition bet numbers exactly 33. Can you say “miniscule sample size”? At least we know the great majority of NFL bettors at Caesar Sportsbook – featured bookmaker of the CBS article – aren’t especially fond of flushing money down the toilet.

And everyone should know that betting such props benefit no one but the bookmakers in 99.9999999% of cases – literally.

Before even seriously considering the Bills’ odds specifically for achieving a 17-0 regular record – their first frickin’ game of the season is at the defending champion Los Angeles Rams, ffs – history is not at all kind. In the entire 101-season history of the NFL, just 10 teams have managed winning streaks of 16 or more games in the regular season, only six teams have finished a season undefeated, and of course only two (the 1972 Miami Dolphins and 2007 New England Patriots) have gone undefeated and untied.

Of the aforementioned 10 teams, only four enjoyed a true consecutive-game winning streak of 17 or more games: the 1941-42 Chicago Bears, the ’72-73 Dolphins, the 2003-04 Patriots (all-time leaders with 21 straight wins) and the ’07 Patriots. Since 1941 alone and not including AAFC and AFL games, a total of 1,896 individual seasons have been played by NFL teams: That’s a probability of approximately 0.05%. All things being equal, then, the average team should be getting on the order of, at very least, 90/1 based on a 100% vig and past history.

You know what Caesars is offering on the Bills to go 17-0? Thirty-five to one! That’s an implied probability of 2.78%! If 35/1 odds were remotely fair, we should have seen just about one undefeated team per two seasons since 1941, or slightly more than five times the number of 17-game win streaks we’ve seen thus far. Ridiculous, right? So why waste your money on this prop?

Put it another way: The Bills are a 1-point underdog for the opening-day Thursday Night Football game; the payout on Buffalo -1 is -105 (or an implied probability of 51.22%). What if that payout were -355? Would you buy that, even for a joke gift for an optimistic fan since the AFL days? Doubtful.

In the final analysis, then: Dude, stay away from the “Buffalo Bills Go Undefeated”-type props. I mean, geez, if you’re that confident, just bet ’em in the over/under wins prop.

And if you somehow need more convincing, tune in to NFLbets tomorrow to see some of the ridiculous stuff that’s happening regarding Dallas Cowboys team props… 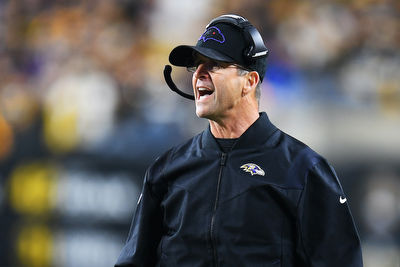 Ravens have won an NFL record 20 straight preseason games. They have gone undefeated in each of the last five seasons. Sports bettors are loading up on the Ravens to make it 21 in a row in their preseason opener against the Tennesee Titans on Thursday night.