While the preseason goes on, NFLbets is considering betting NFL futures and proposition bets for 2018. Despite the frustrating difficulty of seeing into the future via metaphorical crystal ball, we just love the “Over/Under Wins” and “To Win Division” props for the upcoming season. Today, NFLbets ponders the NFC South.

•  Since the NFC South itself was established with the addition of the league’s 32nd team in 2002, only twice has the defending division champion repeated as champion. Both of these instances were part of the 2013-16 threepeat run by Cam Newton’s Carolina Panthers, which included both a 7-8-1 SU division-winning year and a 17-1 SU run to Super Bowl 50.

•  Only six of the 24 playoff teams from the NFC South have posted fewer than 11 wins.

Apparently neither fact disturbs the pragmatic resolve of Las Vegas bookmakers and online bookmakers, who reckon the NFC South will turn out something like this: 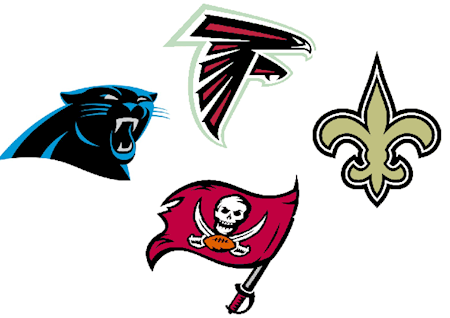 Add to this NFLbets’ compilation of the sportsbooks’ projected finish for the 2018 NFL season based on over/under wins lines and current lines have the Atlanta Falcons squeaking into the playoffs as the no. 6 seed.

Heck, only in July did NFL bettors flip the lines in the “To Win Division” prop into the New Orleans Saints’ favor.

So what gives? Could this be the year when two 9-win teams from the NFC South both make the playoffs or do these lines merely reflect bookmakers’ willingness to admit the ineffability of this division?

The latter, thinks NFLbets – and we’re willing to put the real-life money where the metaphorical mouth and recommend (*not a best bet, mind you*) taking the Carolina Panthers to win the NFC South at +390. We’d also feel pretty good about plunking a few dollars on the Atlanta Falcons going under 9 wins.

As for the Saints, hell if NFLbets knows…

Saints fans doubtlessly believe that, in spite of a quarterback turning 40 during the NFL playoffs, their team should be considered among the up-and-coming NFC teams of the future (or present). We’re talking teams combining superstars with nascent young talent like the Los Angeles Rams and San Francisco 49ers and Minnesota Vikings.

The evidence against these Saints actually maintaining the 11-win total of 2017 for ’18 is somewhat compelling, however. In 2017, the New Orleans offense was lauded for its exciting, scoreboard-spinning nature (their 28.3 points per game average was the NFL’s fourth highest) that also produced Drew Brees’s single-season career high for completion percentage thanks to a fantastic running game of Mark Ingram and Alvin Kamara (plus Adrian Peterson -- not!).

Despite the accolades, though, the Saints were graced with a relatively easy schedule against which they underperformed: New Orleans was just 3-4 (ATS and SU) against playoff teams in 2017, with all three wins coming against the Carolina Panthers and the Atlanta Falcons. Thus was the Saints’ playoff loss to the Minnesota Vikings, bizarre ending aside, inevitable to the NFL bettor.

The most scintillating of an often-inspired 2017 New Orleans Saints defense, though, was the secondary. The Saints ended up no. 3 in total interceptions, led by NFL Defensive Rookie of the Year Mashon Lattimore, 2016 draft pick Ken Crawley, Kenny Vaccaro in his prime and rookie FS Marcus Williams. Oddly enough, the biggest acquisitions the New Orleans brass made this offseason were in this area: Replacing Vaccaro are Patrick Robinson, who played well with the champion Philadelphia Eagles but got his career off to a rocky start with Sean Payton’s Saints in the early 10s; and former Carolina Panthers CB Kurt Coleman, whose best performances have come against the Saints.

Poor against the run last season – the defense was bottom five in rushing yards allowed and yards per attempt for much of 2017 – the Saints will be no better in this area this season.

Conclusion: 11 wins seems unlikely, but 9½, well … the Saints open thusly: vs Tampa Bay, vs Cleveland Browns, at Atlanta Falcons, at New York Giants, vs. Washington, bye, at Baltimore Ravens. All things being equal and all players staying healthy, that’s 4-2 SU at least and 6-0 is hardly inconceivable.

But with the Saints’ 2017 success so tenuous (Can Kamara really be that good again? Will the Saints really beat up their division rivals this year to balance out an 0-4 against non-divisional playoff teams? Can Brees really throw for 72% accuracy again?), NFLbets has little faith Payton et al can manage a 9-7 record, much less 10-6 or better.

Plus, there’s something about the phrase “Tom Savage is your backup” that scares money away…

As for the Atlanta Falcons, don’t make NFLbets laugh! The Falcons’ current down-trending state in the downside of a process common to North American sports. In the offseason after egregiously losing the Super Bowl, the only major personnel move the Falcons chose to make was replacing Kyle Shanahan – the dude who'd built up an offense in his second season as Atlanta offensive coordinator to average a whopping 31.875 points per game – with college coach Steve Sarkasian.

Sarkasian turned the greatest show since the Greatest Show on Turf into a middling, ho-hum offense as the talking heads mindlessly bleated on about a “Super Bowl Hangover.” (Very mathematically sound, that.) Sarkasian is still Falcons OC for 2018; has anyone noticed…?

Beyond Sarkasian, consider that all the Falcons' offseason moves involved Atlanta on the wrong end of the deal, namely in the departures of DE Adrian Clayborn, DT Dontari Poe and WR Taylor Gabriel. All jokes, stats and history aside, this is right now a team in decline. Take the Atlanta Falcons under 9 wins.

Normally, NFLbets would write off the 2018 Tampa Bay Buccaneers’ chances of winning the NFL South with a pithy throwaway line, but one supposes that the forecasted fourth-place team with the shortest odds should be taken at least a bit seriously and … nah. We’d say take the Tampa Bay Buccaneers to go under 6½ wins, joyless as that sounds.

We love the possibility of a lame season by the Falcons, but that nearly 4/1 payout on the Carolina Panthers to win this division is quite the temptation indeed.
The truth is that Cam Newton is the only starting quarterback in this division that can remotely be considered in his prime. The truth is that the Panthers may be drawing just two playoff teams (the Eagles and Pittsburgh Steelers) before week 15, when they’ll get a home-and-home against the Saints and a home game against the Falcons. Newton took an injury early in the preseason and is already listed as questionable for game 1 against the Dallas Cowboys, but hey: He’s gonna play.

And what of Kelvin Benjamin, so-called superstar wide receiver? The truth is that, between 2014 and his departure to the Buffalo Bills halfway through 2017, the Panthers were 24-7 including the playoffs without him and just 18-20-1 with him active on the roster. Here’s to thinking Newton appreciated the two-year extension given to TE Greg Olsen, who’s led this team in receiving yards, receptions and targets three times.