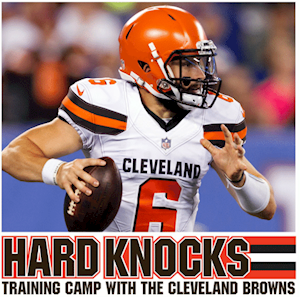 A rant about Hard Knocks.

Y’know what NFLbets really hates? F^%#@^&ing reality tv! Seriously, has anything in human history ever been so unaptly named! Folks, it’s *teevee* and therefore unreal, surreal perhaps, but most definitely unreal!

Reality tv is to live television as spam is to pork: a composition of cheaper product slapped together with no nutritive value for greater culture and even individual betterment! Shows ranging from Survivor to Chopped are passed off as substance when in effect nearly every second the viewer sees is staged! It’s written for the “reality star”, re-shot and/or re-cut if necessary! There’s a reason these things aren’t done live, after all…

And yet, viewers of Chopped and Octomom and Jersey Shore and Fear Factor and whatever other mundane BS comes down the tube cheerfully believe in the promise of “reality” on “reality” tv! “Wow, it’s amazing how those bakers can make 1,000 cupcakes in one hour!” the amazed tv zombie says, or “Wow, how could the Bachelor have become such a snake?” as the lie sucks him/her in again!

And Hard Knocks is particularly egregious in the “fake news” respect! Not to mention dangerous for overly gullible NFL bettors! Already a certain sector of fandom gives waaaaaaaaaaaay too much credence to preseason outcomes! Worse yet, too many are throwing good money away betting on football while “armed” with this “information”!

In fact, sources tell NFLbets that the largest fraction of bets on the “over/under wins” futures bet are being plunked down on the Browns right now! Higher or lower! And you can’t tell me that the most forgotten team in the NFL is suddenly seeing Patriots-level action due to anything other than the massive exposure of an HBO production!

This NFL bettor, Os Davis, has seen one full season of Hard Knocks (the one starring the Los Angeles Rams 2.0) and at least one episode of most other seasons! Woof, is this show brutal, even by reality tv standards! Every season, NFLbets tries to avoid this damn program, but something keeps dragging us back!!!

In short, NFLbets can positively assert that season 13, episode 3 of Hard Knocks does the Cleveland Browns coaching staff no favors at all! Hue Jackson looks as lost in space as any NFL head coach since Art Shell, and we get another how many episodes of this?! Offensive Line coach Bob Wylie has a philosophy straight out the 1940s! His training regimen would never include stretching because soldiers in World War I and World War II didn’t stretch before hitting the beaches! It begs the question: “Wouldn’t football be an easier game with machine guns and artillery?! It would also take care of a lot of the CTE issues, too!

But worst of all is defensive coordinator Gregg Williams! If you want any proof that everything on Hard Knocks is at very least exaggerated, observe the meeting between Williams and washed-up country singer Brad Paisley! Williams doesn’t even know who the f**&#k the skinny little dude is, but nevertheless gives him a canned line! “If you're allegeric to the word ‘fuck’, you’d better get a prescription”! Ha ha!

(To be fair, that could be HBO’s slogan!)

And in the film room?!?!!! Come on! Williams comes off as a complete douche, condescending to his players! Wait until these guys see what he (and, by association, they) look like! If anything, this series is going to work against Mr. Bountygate in terms of play relations! Come to think of it, how does Williams even have a job in the NFL?!? On the other hand, Wylie’s around, and he hasn’t coached an NFL team with a winning record since 2001!

Then about halfway through this mess of a Browns brain trust, we get the denouement of staginess for this episode! It’s still-unsigned free agent Dez Bryant, wearing a T-shirt reading SPIRITUAL GANGSTER! Whatever the f*&#^&^k that means! Browns fans should be pretty depressed about this turn by Bryant, though! Why?! Because all that can be gleaned from this cameo appearance at Browns camp/on Hard Knocks was all about the photo opportunity! Dez is barely more “spiritually” committed to Cleveland than he was two weeks ago!

O yeah, and this whole thing is punctuated with snippets from one dude who won’t make the team and one dude who will make the team! Shocker! Plus Jarvis Landry continues to try and pump up these Browns! If only for more camera time!

It’s been said about the Cleveland Browns before, but NFLbets’ll say it again: What a mess!!!!! At least on camera! And you people are betting on this team one way or another?!?

Before you bet, please consider: What evidence have you seen of either talent or coaching ability?!? What actual, tangible proof can you point to as evidence implying a winning or losing season ahead?!?

And hopefully prior to your wager, you’ll have realized that you’ve been bamboozled by lame “reality” tv again! Or, like all too many, you won’t!