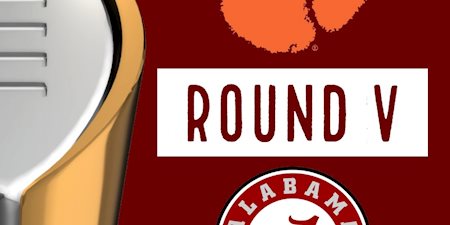 From a football betting perspective, you gotta love NCAA football. The BCS championship has become the most predictable in American sports, surpassing recent runs like the NBA's Warriors-Cavs or Warriors-anyone for that matter, not to mention Patriots-anyone in the NFL. And the college football playoff “tournament” has only assisted in helping out football bettors make money.

Take, for example, really the only proposition bet you’ll need this college football season: “To win the 2020 NCAA College Football Championship.” Here’s how the tables on this prop at two major sportsbooks look:

Aaaaand you can stop right there.

First off, under Nick Saban, the Crimson Tide have lost 15 games – including three to Auburn and two to Clemson – in 11 seasons while taking five national championships. And Nick Saban ain’t going anywhere.

Dabo Swinney, meanwhile, has been Clemson head coach for just 11 losses in the past seven seasons, got the Tigers to 15-0 in 2018 and may be considered the undisputed master of the college football playoff with a career record of 5-2. And Dabo Swinney ain’t going anywhere just yet, either.

Finally, just in case anyone’s forgetting, the last four national championships have been contested between these two.

So NFLbets feels that we don’t need to know about recruiting classes or even, apparently, the starting quarterbacks for these teams to exploit some advantageous lines here. If both teams again enjoy their customary dominant seasons, any underdog hoping to sneak in will have to get past both – and rarely these days do both Clemson and Alabama take a regular-season and a playoff loss each. Obviously, you’ll want to take Alabama and Clemson to win the 2020 College Football Championship in separate bets, and can certainly leverage the opportunity.

At sportsbook #2, the path to profit is simple. Covering Alabama at +200 and Clemson at +200 for, likesay, 100 Moneys (NFLbets’ preferred form of currency) each would net a profit of M100 if/when either takes the title.

At sportsbook #1, a little number-crunching seems to imply that the best bet would be to cover Auburn and Clemson at a ratio of 5:7. For example, covering Auburn for M50 and Clemson for M70 would net M95 or M135.50, respectively, in profit on a championship win.

But the best solution here is to shop around a bit and take advantage of the variance in offerings that still exists this far out from 2019 kickoff. Even in this small sample size, the enterprising football bettor can get both Tigers and ’Tide at 2/1 or better simultaneously – nice.

NFLbets usually doesn’t believe in making seriously wagers this far out from season’s beginning, but I this case, the odds on either Alabama or Clemson just might not get any better before their seemingly inevitable firth straight meeting in the championship game.