Betting on next alleged crime committed by an NFL player 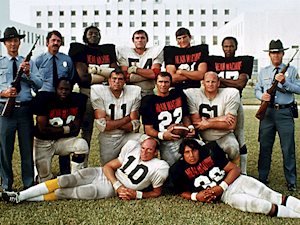 The coronavirus pandemic may be tectonically shifting timetables around professional sports, but at least one NFL neo-tradition is right on schedule. Perhaps brought on by bouts of stir-craziness brought on by stay-at-home advisories, busts have been plentiful this May, what should be the last full month off for players before training camps kick off.

Among the recent lowlights:

• Three days after a warrant was issued for DeAndre Baker (New York Giants) and Quentin Dunbar (Seattle Seahawks), both men turned themselves in to Miramar, Florida, police. Each is charged with four counts of armed robbery, and Baker has an additional four counts of aggravated assault with a firearm to face. However, attorneys for the players have stated that a number of affidavits clearing the two of any crimes have already been filed.

• A shooting incident shortly after midnight earned Cody Latimer (Washington) a laundry list of charges, including second-degree assault, illegal discharge of a firearm, prohibited use of a weapon, reckless endangerment and “menacing”. The Colorado incident was reportedly in relation to allegations of sexual assault on Latimer’s son by an unnamed party involved.

• Finally, Ed Oliver (Buffalo Bills) was pulled over outside of Houston, Texas, with an open container in hand and so was busted for DWI; a search of the car produced a handgun, thus winning Oliver an unlawful possession of firearm charge.

Think that’s enough trouble for the NFL? Get this: All of the about alleged incidents and arrests were made within a period of four days, from May 20 to 23.

Odds on next alleged crime committed by an NFL player
Setting odds on which NFL player would be the next arrested would clearly be some bad juju for the sportsbook(s) which offered such. Plus, a Ray Lewis type (i.e. a bad-news superstar to be wary of from Draft Day on) is a once-in-a-generation phenomenon: Who might have guessed that, for example, third-stringer Josh Shaw of the Arizona Cardinals would get an indefinite suspension form the league for gambling last October?

Questions of karma aside, there’s nothing wrong with betting on upholding the law, is there? In the spirit of truth, justice and the American way, NFLbets presents the proposition bet “Which Alleged Crime Will Result in the Next NFL Player’s Arrest?”

• Assault/aggravated assault: -1200
• Illegal possession/use of a firearm: -1200
• Possession of drugs: -800
• Driving While Intoxicated: -750
• Reckless endangerment: -400. We know what you’re thinking: Sue, these odds are seriously short, but an easy win, right? Wellllllll, those odds are shorter than you think. In the case of multiple charges filed, the bookmaker pays out as though a tie resulted, namely, the payout is divided among charges.

So for example, let’s say you put 100 Moneys on “Illegal possession/use of a firearm” at -1200 going into the weekend. Sure, Latimer’s arrest in the wee hours of Saturday morning win a payout, but because Latimer was also levied with three other charges not involving a firearm, the winning bet here would pay out at a paltry -4800, or 102.10 Moneys. Not such great value at all.

• Violating quarantine orders: +125. The willingness of police departments to enforce quarantine orders has varied from state to state, and which every state in the US set to loosen stay-at-home restrictions by next week, the odds on this can only go up.

• Vandalism/aggravated vandalism: +650. NFLbets’ El Jefe is convinced that Arron Rodgers is just waiting for the opportunity to trash Jordan Love’s home and car out of a combination of professional jealousy and State Farm representation. These odds indicate Bossman may be on to something…

• Influencing the 2020 Presidential Election and/or primaries: +1500. The Democrats are already making excuses for the inevitable thumping their candidate Ray Bolger’s fixing to take in November, so why wouldn’t they to blame, likesay, known Trumpet Tom Brady…? I mean, his wife was born in Brazil of German descent – that sounds like a Russian agent to us!

• Illegal steroid/HGH/PED use: 1,000,000/1. Obviously a sucker bet – if NFL players were really taking steroids, we’re sure the NFL’s testing system would have rooted them out by now…