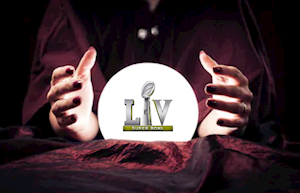 Here’s the thing: Sentimentality and winning money in NFL betting are essentially mutually exclusive. NFLbets can say (write?) with confidence that no bettor ever became prosperous wagering on feelings and hunches. The proper bettor must place the emphasis on the numbers, the trends, the facts and information.

Yet for this Super Bowl, virtually every pregame show, ESPN gabfest or gambling-centered podcast since the conference championship games, the would-be Nostradami are pleased to inform that LV will be a great game, a close game and the Buccaneers might just win because Tom Brady. Get caught up in too much of the noise and the mantra of “Brady the GOAT, Brady the GOAT, Brady the GOAT” threatens to obfuscate rational thought about the point spread, which on Bowl Eve still reads

NFLbets implores bettors to stay sane, particularly as regards a certain player wearing the number 12 jersey. When considering how to bet the actual outcome of Super Bowl LV, we’d advise trying to strip away the names and labels. Consider:

•  In getting to the final game, Kansas City first ran up a 19-3 lead against Cleveland before holding on for a win with a perennial backup at QB; they then smoked the Buffalo Bills, who had been looking like the AFC’s hottest team. Tampa Bay meanwhile let the 7-9 Washington FT stay within a score in the wild-card round, took care of business against a crippled New Orleans side and got past Green Bay because Matt LaFleur forgot how math works.

•  In the NFC championship, Aaron Jones fumbled early in the 3rd quarter to allow the Bucs to earn a 28-10 lead after a single 8-yard TD pass. Thereafter, the Buccaneers starting quarterback went 6 for 13 for 70 yards – 29 yards of which came on a single reception to a guy considered the greatest TE ever to play the game – and 3 interceptions.

You can see how NFLbets – or even those merely considering these general trends – would favor Kansas City in this game. Of course, there is the actual football to take into account. Putting aside the mystique of Touchdown Tom, the real advantage(s) Tampa Bay has in Super Bowl LV is all in the trenches.

The truth is that the Chiefs defense ranks 31st against the run by the DVOA metric and dead last in the red zone; not exactly the stats you want when facing the twosome of Leonard Fournette and Ronald Jones, guys who have been damaging unprepared run Ds all 2020.

And then there’s the well-publicized shuffling of the K.C. offensive line, beginning with left tackle where Mike Remmers moves from RT in the wake of Eric Fisher’s injury and affecting four of the five spots. Center Austin Reiter is the sole starter in the same position from last year’s Super Bowl win. But recall that a) the Chiefs get a bye week, b) Reid himself played on the BYU OL, and c) Chiefs line coach Andy Heck is an 8-year veteran of the Chiefs and considered one of the NFL’s best. NFLbets believes Kansas City has time to formulate a plan, even one that entails stopping Jason Pierre-Paul and compadres.

But hey, forget the facts if you must. You want a compelling narrative? Try this: In Super Bowl LV, we’ve got a generational matchup of Hall of Fame-level quarterbacks that might only be compared to Namath vs. Unitas, Bradshaw vs. Staubach, Manning vs. Wilson – now recall whose team won those matchups. This very game may be the flashpoint moment, the turning point, the changing of the guard from the Brady/Roethlisberger/Rodgers lot (and peers like the Mannings, Brees and Rivers already gone) eclipsed by a surprisingly massive wave of exciting young QBs starting with two-time Super Bowl MVP Patrick Mahomes and including Josh Allen, DeShaun Watson, Kyler Murray, Joe Burrow, Justin Herbert, Lamar Jackson, etc.

And with a win, the fledgling would-be GOAT will have led his team to this first Super Bowl championship repeat since who else but those 2003-04 Patriots. Who, except for maybe Gisele Bundchen, not appreciate such a narrative? Take the Kansas City Chiefs -3 vs the Tampa Bay Buccaneers and enjoy the history of the moment.