On the road to the Sim Bowl: Betting the Madden Madness sim NFL tournament

Can you believe we’re already just one week away from the Super Bowl? Well – the BetOnline Madden Sim Super Bowl, that is. The final games in the simmed regular season, played using 2019 rosters, have ended and the tournament phase begins.

Bet Online’s Madden sim game distinguished itself from many an online sportsbook’s offerings in its unique format – which the actual NFL might consider using in a shortened-season scenario, except for the whole games-every-day thing, we suppose…

The teams in each of the league’s eight divisions squared off in round-robin format over six games in World Cup tournament-style. After round-robin play, tournament play begins. In round one, all 32 teams compete in single-elimination games. The seeding here is determined by grouping teams from each division with its conference counterpart and ranking by record in pool play. So for example, the round one game in the West features the no. 8 “Los Angeles” Chargers at the no. 1 San Francisco 49ers.

The Sweet 16 round runs May 27-28 and will elimination all but two teams in each region for the Elite 8 round of May 29. The Final Four round (slated for May 30) will be made up by the winners of the North, East, South and West brackets, while the Madden Sim Bowl happens on May 31 – probably just in time for another season of sim football betting because why not?

Click on the image below to see the Madness Madness tournament schedule. All games may be watched live on Twitch at twitch.tv/betonlinemadden. 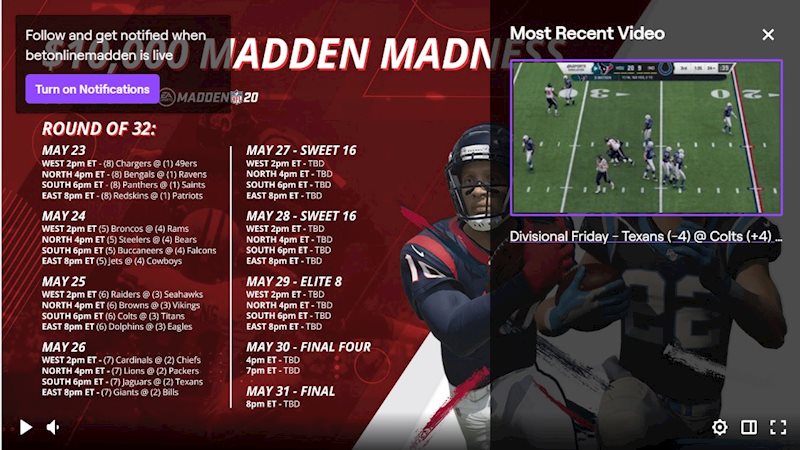 Since the Final Four round will be reseeded, NFL bettors can’t exactly cover a futures bet on a winner and in fact Bet Online isn’t offering this particular prop bet. However, what is incredibly interesting is the real-life Super Bowl champion Kansas City Chiefs and NFC champion San Francisco 49ers are both seeded in the West.

But hey, let’s throw some predictions out there anyway. We’ll go with the no. 1 Ravens from the North, the no. 2 Chiefs from the West, the no. 2 Texans from the South and no, NFLbets won’t be going against even the sim Patriots, no. 1 seed in the East. So it’s probably Ravens vs Chiefs in the ’Bowl. Though we’ll just be, as they say, taking these games one at a time.

As for how to bet on Madden Football sims – if you’re not already in the know – It’s as simple as betting on sports as you normally would, though offerings are limited to a few basics such as pointspread, money line and over/under bets for the game, quarter and first half; no player props and other proposition bets are available, though for the Big Game, who knows…?